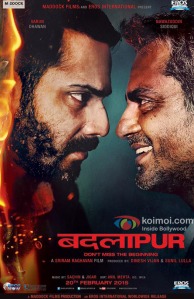 When you have everything one moment and nothing the other, reflexes like shock, grief and desperation are natural and expected. So are the various coping mechanisms. But when the life of a loved one is cut short suddenly, that too by way of murder, there is no stronger need than that of revenge. What greater desperation could there be than not knowing – who did it?

Writer/Director Sriram Raghavan after Ek Hasina Thi and Johnny Gaddar, has once again proved his mettle in the genre of dark revenge thriller. Through Badlapur, Varun Dhawan as Raghu has finally launched himself as a serious actor and at par with his contemporaries in Bollywood. Nawazuddin Siddiqui known for his superb acting capabilities has yet again excelled as a bank robber and a murderer. The supporting cast including Huma Qureshi, Yami Gautam, Divya Dutta, Vinay Pathak and Radhika Apte are just right in their roles in a plot that briskly build the tempo towards a twisted and an unexpected end.

Varun Dhawan is a happy and successful creative lead of a Pune based ad agency whose life takes a u-turn when his wife (Yami Gautam) and child are murdered by bank robbers. While one of the robbers (Vinay Pathak) manages to escape with all the money, the other (Nawazuddin Siddiqui) is caught and sentenced to 20 years of imprisonment even though he never really accepts his involvement in either the murder or the robbery. Frustrated at his inability to identify the real killer, and to get over his loss, Varun Dhawan starts an inconspicuous new life in the small town of Badlapur.  However, fate again puts him back in action when Divya Dutta (an NGO worker) arrives at his doorstep to inform him of Nawazuddin Siddiqui’s slow death from cancer.

Badlapur tickles many emotions of a troubled mind. From a man desperate to find and punish the killer of his wife and child, to a woman willing to have sex with a stranger so her husband’s life is spared, the movie has it all. When the tickle turns into a scratch and ultimately into a dangerous wound, is as difficult to point out as it is to understand when Varun Dhawan’s character becomes a monstrous killer from a mourning husband and father.

For a crisp 135 minutes, the smaller flaws of the movie can be conveniently ignored.  Be careful for there are some graphic violent and sexual scenes in Badlapur.

My recommendation: This is a must watch for lovers of new age cinema. Whether it is Varun Dhawan’s rage or Nawazuddin Siddiqui’s abhorrent smirk, the movie will make you smile even at its darkest moments.

Aditi Mukherjee is the author of the popular contemporary fiction ‘Love in times of terror,’ a historical fiction ‘The Last Mughal Warrior in Love’ and a travel humor ‘Europe for a bargain.’ Extensively covered by the press across six states in four newspapers, her books have been well received and have garnered many excellent reviews on various platforms. View more posts